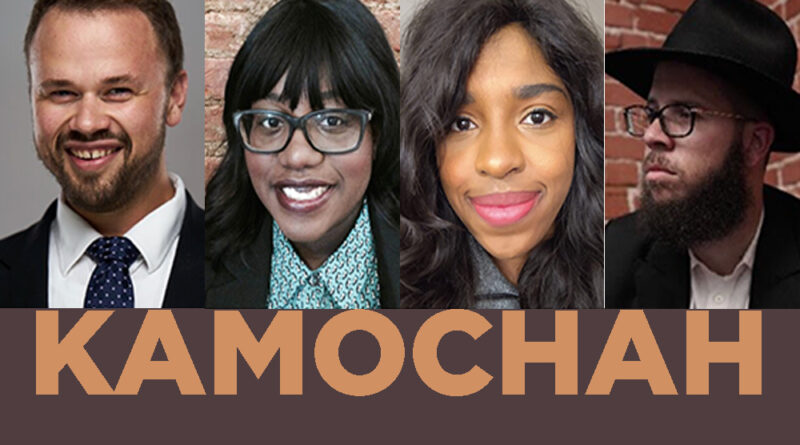 As society advances and connects via social media, all types of diverse groups continue to organize and flourish. Recently, I came across a relatively new Facebook group: Kamochah.

I am knowledgeable in Hebrew, and was at first surprised by the word “Kamochah”. The word sounds like a type of tea or an Asian word, certainly not Hebrew. After I took a second look, I understood that it is a transliteration of a biblical word.

In both the Old Testament and the New Testament, this well-known verse is deeply ingrained in Judea-Christian liturgy.

In Leviticus, in the Old Testament the Torah scroll states three words in ancient Hebrew. Love your neighbor as yourself (Ve-oh-hafta … le-ray-ah-chaw … kaw-moe-chah). It is the third word that this Facebook group transliterates as “Kamochah.”

Created by Jews of Color

This group was created by Black Orthodox Jewish individuals and is probably the first online community for Jews of color. The group has a membership of about 150 Black Orthodox Jews, and was formally started last December with support from the Jewish Federations of North America. It was formed during the last year of civil unrest.

Operated by religious Jews of color, the members volunteer to conduct classes and events. The classes are as diverse as giving lessons on how to make kosher Louisiana bread pudding to the daily prayer services. The group will challenge each other with questions and attempt to reconcile all opinions to reach answers. They even started a singles matchmaking service.

The founding of Kamochah is a direct reflection of the times. Every aspect of society is participating in the growing recognition of equality. Jews, along with the rest of society, have launched initiatives to engage in the national and international movement to confront racial justice issues.

Most people have a misunderstanding of who orthodox Jews are. Like America itself, American Jewish communities are diverse and do not all identify as white. A 2019 report as reported by the Jew of Color Initiative estimates that 12-15% of Jews are non-white. They are Black, Asian, Hispanic and multiracial.

Some religious Jews are uncomfortable participating in secular events because they feel that the activities challenge their religious beliefs.

“There are Orthodox Black Jews who want to be in an affinity space with other Black Jews but can’t go to some of these other organizations because they’re not visibly religious (looking). Going to events and there’s no kosher food or having to worry about other prohibitions-whatever it is, we just have different needs.”

“It’s reflective of a broader change that is the reality of the demographics of Jewish America, and I think the presence of Black Orthodox Jews- and of Jews of color more broadly- has awoken the broader Jewish Community up to the fact that we’re not all from Europe and that we’re not all white.”

Rabbi Isaiah Rothstein, another co-founder of Kamochah, offered, in my view, a stellar reflection of general American society in 2021.

“It should be normative to be in a multiracial Jewish community where there are Black Orthodox Jews,” Rothstein said. “I’m starting to see an active interest from some people around wanting to learn about racism, wanting to teach their kids that there are different types of people in this world.”

Diversity and inclusion are really loving your neighbor.

On June 19, 2021, in celebration of the new federal holiday Juneteenth, United Airlines Flight 1258 took off from Houston, Texas. This event is newsworthy because every crew member from the pilot, first officer, flight attendants and ground crew were all African American.  On Feb. 26, 2017, a Delta Airlines flight made history when it took off from Detroit, Michigan, to Las Vegas, Nevada, and both the pilot and the first officer were black females.

According to the Chicago Tribune, United Airlines has an ambitious plan to train 5,000 additional pilots. The airline expects 2,500 of them to be women or people of color by 2030.

Israel Progressive with Women in leadership

Israel, the Middle East’s only democracy, elected 27 cabinet ministers to be installed in their new government. Nine of the 24 ministers are women.

These nine women are of diverse backgrounds and different priorities.

Meirev Cohen was elected Social Equality Minister and gave birth to her third child within days of taking office.

Karin Elharrer was elected Energy Minister, and is active in disability law and children’s rights.

Merav Michaeli has been elected Transportation Minister, and assisted in the establishment of a nonprofit that assists victims of sexual assault.

Pnina Tamano-Shata was elected Immigration and Integration Minister. She was born in Ethiopia in 1981 and was brought to Israel three years later as part of Operation Moses. She is a lawyer and campaigned to further support the rights of Jews of color and the advancement of Ethiopian immigrants.

Hopefully, we are going to reach the point in society when we will truly: Love your neighbor as yourself.