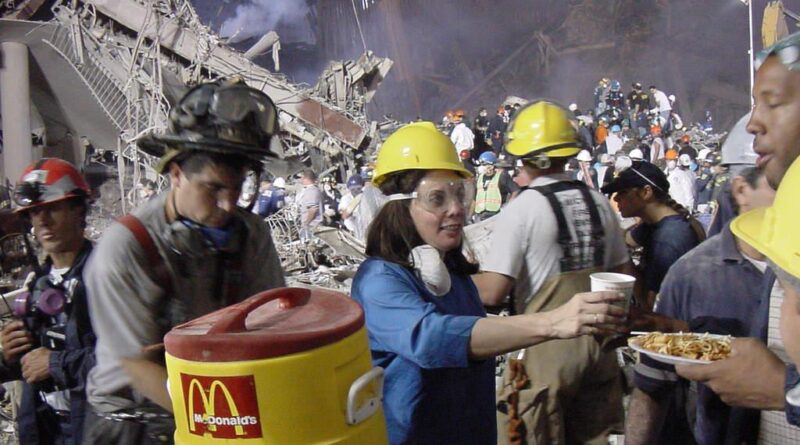 This is a photo of our CEO Libby Hikind (in the blue shirt and yellow hardhat) after 9/11. 20 years ago, she stood at Ground Zero and served the community surrounded by ash and debris. A firefighter took the picture and handed her the disk from his camera as a memento and a thank you for bringing food and water to the first responders.

This past week, TV stations, newspapers, and social media memorialized the awful events that occurred on 9/11. The images of civilians fleeing the rubble of the Twin Towers have left a powerful mark on American history. I will leave it to historians and photojournalists to document the moment that changed the lives of so many people.

This Saturday, September 11, 2021, was a beautiful sunny day and was reminiscent of the clear blue skies on the fateful Tuesday morning 20 years ago. As a former resident of the city, my fellow New Yorkers and I can recall the exact moment we processed the attack on our homeland. This is much like folks who can recall the moment Lee Harvey Oswald shot President John F. Kennedy in Dallas, Texas, on Nov. 22, 1963, or older generations that remember the shocking news of the attack of U.S. naval vessels docked at Pearl Harbor on a sleepy Sunday morning of Dec. 7, 1941, in the scenic Hawaiian harbor.

Appreciate What You Have Everyday

What I still remember 20 years later is that all the passengers on the highjacked airliners and all the innocent victims in the Twin Towers and the Pentagon attempted to make the same phone call.

They must have known that death was imminent as the three passenger jets were veering out of the sky, and as the workers on the high floors of the Twin Towers were inhaling the smoke and feeling the tremendous heat.

Every person, regardless of race, religion and national origin, made the same telephone call to family and friends. They didn’t call their stockbroker or banker. They all called their inner circle and told them over and over how much they loved them.

Human nature is such, that when we have something, we don’t truly appreciate it until we lose it. 9/11 taught me to appreciate each day and treasure the loved ones in our life. On that day, almost 3,000 people were enjoying a beautiful morning. In moments, it was gone.

The days that followed were some of the most patriotic days since D-Day.  Flags were flying, and the families of the survivors were eternally grateful. The symbol of our flag was in our hearts to live on as a sign of our resiliency.

GrantWatch’s message is to appreciate what you have because it can all be gone in a second — our lives, our liberty, our faith and our family.