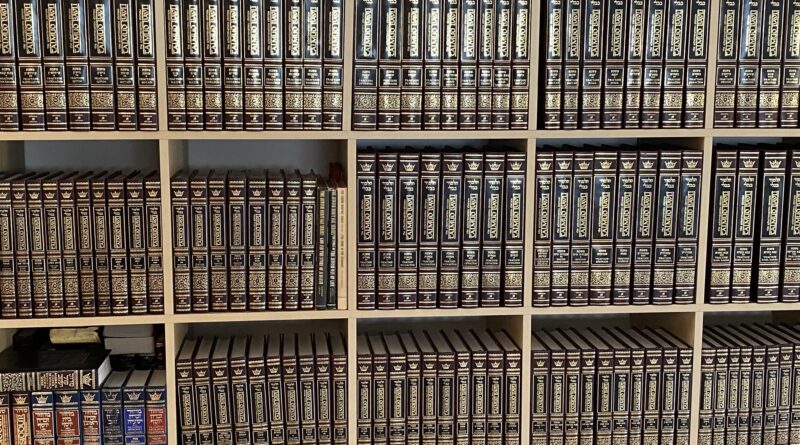 ArtScroll Studios began as a small studio in 1965, started by Meir Zlotowitz, a highly skilled graphic artist. It began as a neighborhood shop and specialized in producing artistically designed invitations, brochures, and specialty items. In 1975, a close friend of Zlotowitz tragically died young and left no children. In tribute to his deceased friend, Zlotowitz authored and published an original biblical commentary through ArtScroll, which to his surprise sold out immediately.

Recognizing the need to publish English language texts, in collaboration with other highly educated graduate students of theology, they continued to author and publish university-quality textbooks for the general public at an affordable price.

In the first 10 years of their existence, they produced close to 700 different publications. This included historical volumes, novels, children’s stories, and their trademark biblical books that they translated from the original ancient Hebrew and Aramaic. The publishing company chose the name ArtScroll to emphasize the visual appeal. The books are foremost a scholarly volume and secondly an artistic statement. They result in not only a cognitive but also an esthetic finished product.

GrantWatch has a category specifically for Arts and Culture grants. This category includes grants for authors, as well as grants for books and increased access to literature. There is also a category for Literacy and Library grants.

In the summer of 1988, a gentleman arrived unexpectedly at the original ArtScroll office in Brooklyn, New York.

The man explained that he wanted to meet the owners of the company and went to the offices of Zlotowitz and his partners. The visitor introduced himself as Professor Joel Fleishman, the first senior vice president of Duke University. He told the principals of ArtScroll that he was a loyal and admiring customer and was familiar with their publications.

In addition, he said he was very grateful he was able to read the ancient texts in English. He also wanted to personally thank the publishers for their good work.

After complimenting the publishers, he pointed out that the quality of the books was equal to that of college textbooks. He inquired how it was possible for ArtScroll to produce books of high quality at a fraction of the price. The reply was both serious and humorous, “With long hours and frequent borrowing.”

Professor Fleishman was surprised. “I’ve been at Yale and I’m now at Duke. I know university presses,” he explained. “You simply can’t produce such scholarly literature-involving hours of study, research, and copious editing-without the support of a not-for-profit foundation.”

Little did they know that Professor Fleishman was a nationally renowned authority on foundations and planned a pleasant surprise.

With the assistance of Duke University’s attorney of Planned Giving, they set up an IRS-approved foundation for ArtScroll.

In addition, Professor Fleishman continues to serve as the chairman of the Board of Directors. Today, as a result of the creation of the nonprofit foundation, a separate and complementary relationship exists between ArtScroll and Mesorah.

Thanks to the sponsorship of generous benefactors from around the world, the team of scholars and editors has grown to over 100 individuals. ArtScroll/Mesorah has already published more than 3,000 titles and the Mesorah Heritage Foundation manages a budget of $8 million, each year.

The many editors employed consider it a religious duty to meticulously inspect every written paragraph. It can take 200 hours for the scholars to produce in English a single page of the ancient Talmud, translated from the original Aramaic.

Each page is painstakingly written and reviewed by numerous editors. Additionally, they ensure accuracy, clarity, and a literary style that a modern reader can appreciate. This unique publishing company produces scholarly volumes that are artistically pleasing at reasonable prices thanks to donations to the foundation. Had they not formed a foundation, it would not have been possible to market the books without raising the selling price by 3 or 4 times.

In 2017, the founder Meir Zlotowitz died, and his son took over the leadership role. His first major change was to move the company to a new state-of-the-art headquarters. They relocated to Rahway, New Jersey, in part because of the “Grow NJ” tax incentive program. Town Mayor, Raymond A. Giaccoba welcomed them in a well-attended ceremony.

The Mayor spoke, saying “the City of Rahway is thrilled to welcome ArtScroll/Mesorah to our business community. The influx of jobs is significant for us and ArtScroll’s extensive renovations for its use and for additional tenants will bring new life to a quarter-million square feet of industrial space that has been vacant for years.”

From a humble beginning, with the help of benefactors, the next generation of scholars now have 250,000 square feet, where they can print, bind, warehouse, and ship the finished product. This is all possible because the foundation has been able to convert Meir Zlotowitz’s vision into reality by funding the scholarship that creates the manuscript for publication.