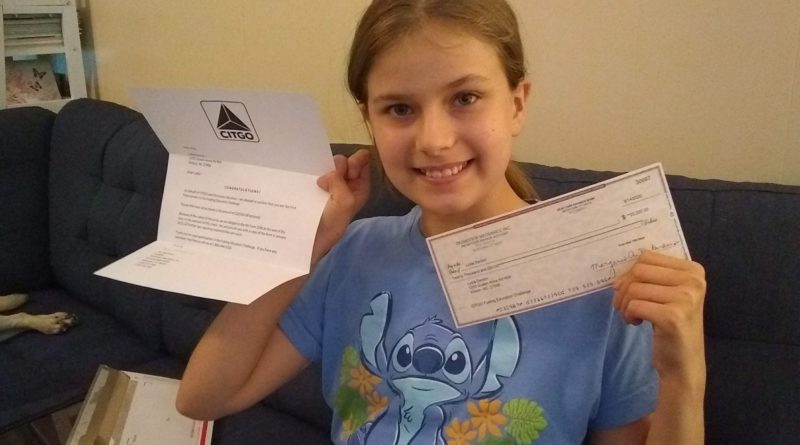 Lydia Denton, a 12-year-old girl from North Carolina, recently won the CITGO’s Fueling Education Student Challenge. The sixth-grader was the recipient of a $20,000 grant after inventing a device that can be added to any car seat to prevent babies from being left in the hot car, which in many cases resulted in the baby’s death.

“Winning the money was cool, but I really care about saving lives,” Lydia tells PEOPLE.
“My first thought was, maybe no babies will die this summer!”
After watching the news about how many babies died each year from being left in hot cars, Lydia said she became inspired.

I did some research and saw that it happened a lot and that it wasn’t just neglectful parents,” she explains.
“I got really upset and wanted to try and help. At first, I thought about raising money for the families, but that wouldn’t fix the problem. I wanted to invent something that could prevent the deaths from happening,” she adds.

“My mom has a saying: ‘Stop complaining and do something about it.’ Complaining or being sad doesn’t solve the problem, we have to take action to make a change. What I wanted was a device that had the ability to get 911 there to save the baby if a parent didn’t respond,” she shares.
“I also wanted something everyone could afford. Also, babies grow! I wanted it to be a portable thing that you could move from one car seat to the next and keep using” she adds.

After much thought, Lydia created the first prototype of her invention, Beat The Heat Car Seat. The device works through a pressure pad under the car seat cover, which can sense weight over 5 lbs. When a baby is in the seat, the system starts itself up and monitors the temperature.

If the temperature reaches above 102 degrees, the seat will set off an alarm along with a warning on the LCD display. A text will also be sent to the parent’s phone. If the parent does not reset the button within 60 seconds, a message is sent to 911 with the built-in GPS chip, called an Arduino, sending the car’s location to emergency services.

For those who may become inspired by her story, Lydia has one message:

Don’t think that you have to accept things in the world. If there is something that bothers you, think of ways to make it better!

Lydia Denton might be young, but that’s not stopping her from saving lives and making an impact in the world.

Find grants for Technology and STEM available on GrantWatch.

• Grants starting at $5,000 to individuals for projects that use artificial intelligence to support environmental sustainability.

• In-kind grants of technology and support services to USA K-12 schools and institutions of higher education. Grant recipients will receive licenses and services to support the implementation of safety technology.

• Grants to USA IHEs for instrumentation and equipment to enhance minority participation in STEM research.