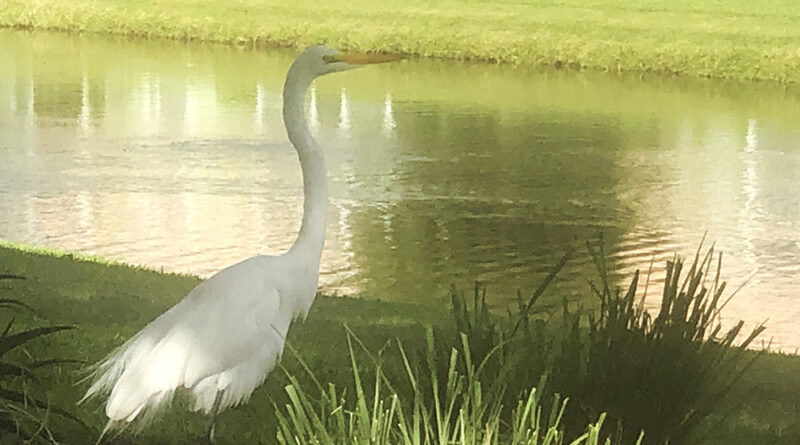 Our Home is a Zoo

My wife and I have been vaccinated for COVID 19. So we invited our children and grandchildren to visit us in Florida. They have really enjoyed our backyard zoo. Their curiosity and attraction to the animals remind me of my visits as a child to the Detroit Zoo.

We live on a canal, close to Loxahatchee National Wildlife Refuge which is part of the original Everglades. Our backyard is considered a zoo by our grandchildren. Our birdfeeder has attracted: cardinals, blue Jays, woodpeckers, doves and hawks. We have documented the following creatures: turtles, frogs, toads, lizards. iguanas and snakes. We have seen a fox, opossum, raccoons, and a family of owls.

The tropical birds that visit are always welcome. We have seen spoonbills, herons, egrets, storks, and various ducks and geese and their babies. Observing the wonders of nature has been an activity that has connected grandpa and grandchild in a very real sense. And we are so excited about all of the Florida grants available at GrantWatch for the environment and wildlife.

The Detroit Zoo Will Never Be the Same Without Ron

At my age almost everything I do reverts to nostalgia. My backyard zoo brings me back 40 years to my childhood visits to the Detroit Zoo.

Next month the Detroit Zoo’s executive director will retire at the age of 69. After almost 50 years of working at zoos. Ron Kagan first came to the Detroit Zoo in 1992 and made front page news in the local newspaper.

The Detroit Zoo had a premier attraction; two Asian elephants that really brought the crowds to the zoo. These beloved pachyderms, Winky and Wanda were my favorite attractions. But sixteen years ago, Kagan decided that the cold Michigan winter was causing arthritis and other aliments to Winky and Wanda. So he proceeded to close the attraction and ship the Asia born elephants to a preserve in sunny California. There they could live out their life in a more natural environment and socialize with other pachyderms.

Some Other Zoo People Go Wild

When Kagan closed the popular elephant exhibit, zoos around the world were very upset. In fact, the American Zoo and Aquarium Association threatened to remove the zoo’s accreditation because of this action.

Kagan did not relent so they built a new two-acre polar bear exhibit and called it the Arctic Ring of Life. It became more popular than the elephants! He transformed the zoo from an animal display center to an animal welfare facility with emphasis on education and research.

Under his tenure The Detroit Zoo would go on to rescue hundreds of animals from roadside attractions and poachers.

The best compliment Ron Kagan received was from attorney Brittany Peet of PETA (People for the Ethical Treatment of Animals).

Ron Kagan is a zookeeper that even PETA loves.  He was a 21-year-old senior from Amherst College in 1973 and haunted by the Nazi’s murder of his maternal grandparents. He went to Israel during the Yom Kippur war, because he wanted to help. Arriving in Tel Aviv, word got out that he was a zoologist and the next day he was working at the Jerusalem Biblical Zoo. They were famous for having on display the 130 species of animals mentioned in the Bible. He lived in Israel another 8 years, married, had children and earned a masters in zoology at the University of Jerusalem. He returned to the United States in 1985 and became the general curator of the Dallas Zoo.

PETA’s Peet, who still lives in Michigan, summed up his retirement when she said.

Enjoy your retirement Ron. Come down to Florida and check out my backyard zoo. The rest of you should check out this grant from the Kenneth A. Scott Charitable Trust for the humane treatment of animals.