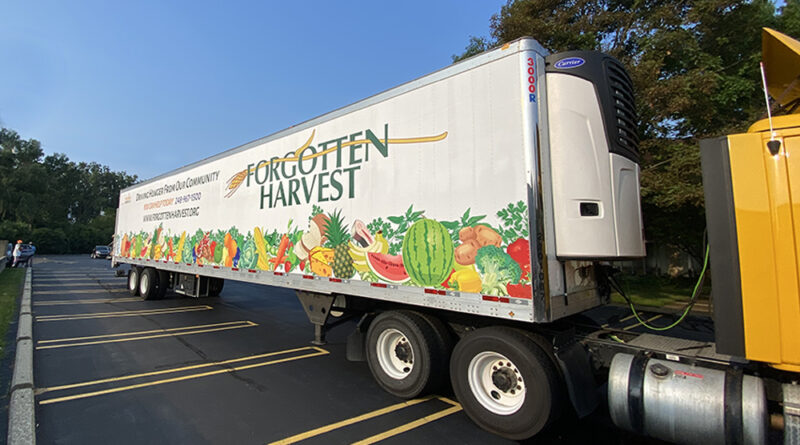 I recently visited the Motor City and had the good fortune of witnessing an active Forgotten Harvest distribution location. Growing up in the Detroit area, I knew about this nonprofit whose motto is “Driving Hunger from Our Community,” but had never seen it in action.

This charitable entity opened its doors in 1990. As an ongoing food rescue organization, Forgotten Harvest schedules and collects donations of at least 200 pounds or more of surplus perishables and non-perishables from donors, such as restaurants, bakeries, caterers, and supermarkets.

At the scheduled time for pickup, Forgotten Harvest arrives with a refrigerated truck and forklift to retrieve the donations. This valuable service saves fresh and packaged food products that otherwise would go to waste and end up rotting in a landfill.

In 1994, Forgotten Harvest partnered with Kroger Co (NYSE: KR). And later in 2007, it won “Best-Managed Nonprofit in Detroit” by Crain’s Detroit Business.

While in partnership with Conagra Brands (NYSE: CAG), Forgotten Harvest earned the Gold Edison Award in 2012 for a “novel partnership between a food manufacturing plant and a food rescue resource to redirect perfectly good & edible, but historically discarded food from a landfill to feeding hungry people.”

GrantWatch has always been committed to the challenge of food insecurity and has many available grants focused on fighting this issue under both the farming/ agriculture and nutrition categories.

Despite all the good Forgotten Harvest is doing, I remember that caterers and businesses were hesitant to contribute, fearing possible litigation in the unlikely event that a recipient was injured from their contribution.

Donors need to be aware that the federal government has removed most liability risk from giving away surplus food.  The exceptions reserved for intentional misconduct or violation of local health regulations.

In 1996, Former President Bill Clinton signed an action into law that was intended to encourage food donations.

“An Act, to encourage the donation of food and grocery products to nonprofit organizations for distribution to needy individuals by giving the Model Good Samaritan Food Donation Act the full force and effect of law.”

The Forgotten Harvest Facebook page lists the times and locations of food distribution sites. The volunteers I spoke to said they regularly interact with the locals, especially the kids who are home all summer, explaining that some parents are between jobs and worry about putting food on the table. This outdoor food distribution event not only brightens a kid’s face, but also helps keep the family healthy and fed.

The EPA (Environmental Protection Agency) has established a Food Recovery Hierarchy. It consists of six tiers listed in priority for the management of unused food, with six being the worst and last resort.

In addition to accepting and distributing food donations, the “Forgotten Harvest Farms,” is 103 acres of idyllic farmland near Detroit, in Fenton, Michigan. The Forgotten Harvest project grows and harvests over 850,000 pounds of fresh crisp produce.

Watch this short video on GrantWatch’s testimonial page of a similar nonprofit that recently won a $10,000 grant to provide 15,000 meals to food-insecure kids in its community.

One thought on “Forgotten Harvest Works to Drive Out Hunger”