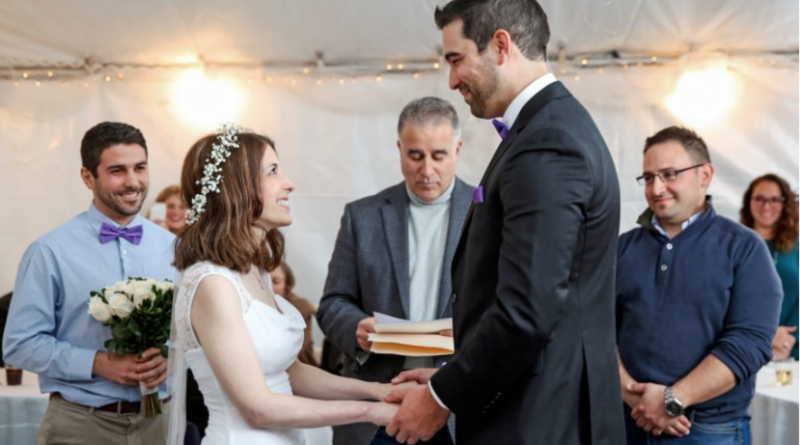 The pressure of planning a wedding would be too much for Nicole Carfagna, who suffers from lupus, a chronic condition brought on by stress. So, her groom handled all the arrangements for her.

Danny Rios spent months secretly planning the entire ceremony, then, out-of-the-blue, proposed to Carfagna when the couple returned home to New York from a December trip to Disney World. In the ensuing span of less than two hours that culminated in a surprise backyard wedding ceremony, Rios and Carfagna went on to become husband and wife – just one day after the bride had celebrated her birthday.

Quite a euphoric slew of events for any bride, let alone Nicole Rios, who was diagnosed six years ago with Lupus, an incurable inflammatory disease that turns the body’s immune system against itself. Since then, she has had to manage joint pain, dizziness, fatigue and inflammation of her lungs and heart when she is exacerbated with stress.

The Lupus Foundations reports some 1.5 million Americans like Nicole Rios live with the disease today. Women of child-bearing age and minorities are most prone to lupus.

That’s why grants that aim to reduce lupus-related health disparities and increase participation among racial and minority populations in clinical trials are of growing significance. One funding opportunity from the National Lupus Training, Outreach, and Clinical Trial Education Program is listed on GrantWatch and administered by the Department of Health and Human Services.

Libby Hikind, founder and CEO of GrantWatch.com, said corporations also have stepped up funding for lupus and other medical conditions that have been affected by freezes on federal research money.

Lupus is an autoimmune disease, which means the body cannot differentiate between its own healthy tissue and foreign invaders. The antibodies or blood-borne proteins responsible for deciding biological friend from foe cause inflammation in various parts of the body.

In its early stages, lupus is difficult to detect and looks like many other conditions, said Gary Gilkeson, associate dean at the Medical University of South Carolina and chairman of the Lupus Foundation of America’s medical-scientific advisory committee. But, problems tend to flare up and abate over time. Singer Selena Gomez, who appeared to be the picture of radiant health during public appearances, shocked her fans last year when she received a kidney transplant because of lupus.

Danny Rios knew Lupus would prevent Nicole from planning a wedding. So, he put all the plans together himself. That meant picking out a suit and a wedding dress for Nicole. He even had Nicole’s father ordained, so he could officiate the ceremony among friends who were given an advance heads-up to meet in the backyard.

All Nicole had to do, when Danny Rios got down on a knee and proposed that night, was say, “yes.”