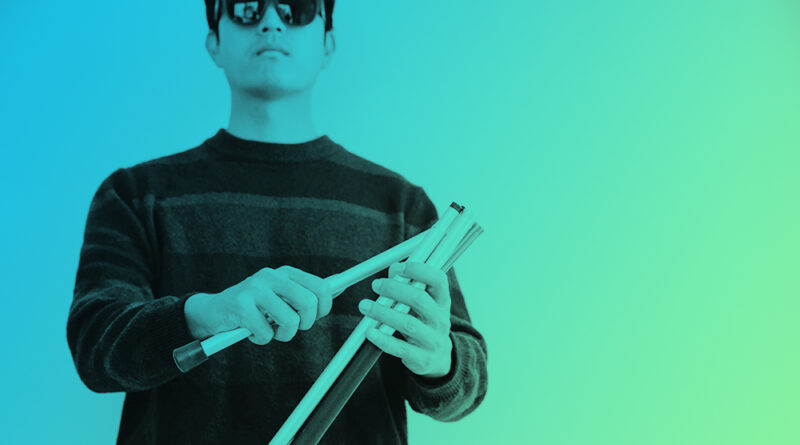 The iconic 60’s ballad, The Sounds of Silence, is one of the best-loved songs of my formative years. This classic song was performed by the singing duo of singer/songwriter Paul Simon and singer/poet Art Garfunkel. Their brilliantly lyrics are mostly written by Paul Simon, while the unforgettable harmonies are highlighted by the angelic voice of Art Garfunkel. This song is about the story of a visually challenged man named Sanford D. Greenberg, who helps Garfunkel see again.

A Book Full of Vision

I recently listened to an audible book, “Hello Darkness, My Old Friend (How Daring Dreams and Unyielding Friendship Turned One Man’s Blindness into an Extraordinary Vision for Life)”. It tells the true story of Sanford D. Greenberg, shedding light on the origin of the first verse of this famous song.  The introduction and narration are by Art Garfunkel and the forward by Ruth Bader Ginsburg.

Greenberg recalled 1959 at Columbia University. He is 19 years old and walking along Amsterdam Avenue in New York, with his roommate and best friend Art Garfunkel. He refers to the time Art pointed down to the ground and said, “Sanford, I’d like to show you this patch of grass. And I’d like you to really look at it.” Sanford was stunned while Art points out how the light illuminates the beauty and complexities of its colors. I was absolutely mesmerized. No one I knew took the time to admire a measly patch of grass.

This memory of looking at a patch of grass is so ironic and tragic because two years later Sandy Greenberg becomes visually challenged with blindness. Just to let you know, nonprofits can see a handful of grants for the visually challenged here at GrantWatch.

“I was pitching in a baseball game right before my junior year. Suddenly, in the seventh inning my eyes became cloudy, very cloudy, very steamy, and I was having a hard time concentrating on the batter. I stumbled to the sideline and dropped to the ground.” Visits to doctors performing unsuccessful treatments, result in blindness for Sandy.

Sanford was now alone in the Big Apple, a poor boy, the son of an immigrant junk dealer from Upstate, New York, and blind.

He went home to Buffalo, locked himself in his room and dropped out of school. So Garfunkel travels to Buffalo to convince Sandy to come back to school. Being just teenagers, they made a pact to always be there for each other. In times of trouble, no questions asked.  But little did they realize that the pact would soon be tested.

A Light Goes off in His Head and a Friend Disappears

So Sanford agreed to go back to Columbia, completely dependent on his friend to take care of him. Art would read to him, walk him to school and do almost everything for his visually challenged friend.

During their senior year, Garfunkel goes with Greenberg to see a social worker in midtown Manhattan. She suggests Sanford consider getting a guide dog or a cane, which only depresses Sanford more. On the way home, Art deserts him at Grand Central Station!

What Friends Are For

Sandy was mortified, angry and frightened. Utilizing every ounce of strength and courage, he feels his way back up town. He is falling and getting bloodied so he asks people for directions. He finally makes it back to the 116th subway station, alone, and banged up. After bumping into people and objects, he arrives hurt and bruised. He finally inches his way to the top of the underground stairs and bumps into another man as he exited onto the street.

Excusing himself, he recognizes the voice of that man as Garfunkel who was following him the entire time. “I knew he could do it … but I wanted to be sure you knew you could do it,” Art explained. And Sandy learns to be independent.

GrantWatch goes to great lengths for our clients with visual challenges, too. Here are some grants for nonprofits, small businesses and individuals that deal with blindness. These grants cover research, purchasing guide dogs and education

Sandy Greenberg graduates from Columbia, earns a doctorate from Harvard University, then marries Sue, his childhood girlfriend from Buffalo and has three children. Greenberg doesn’t let his visual challenges hold him back so he begins to thrive.

Moving to England he attends Oxford University, Sanford explains. “One day, I get a call from Arthur (Garfunkel), who said he was dropping out of architecture school which I was opposed to, but that was his decision.”

“He said, ‘I want to go into the music business with my friend Paul (Simon) and I need $400.’ Before he finished, I told him he would have it. Sue and I had $404 in our checking account and I sent it.”

They had a pact to help each other, no questions asked.

Seeing the Results of Their Friendship

Sanford goes from rags to riches and becomes a successful inventor and patent holder. He builds companies and starts a philanthropy that awards millions of dollars to doctors and scientists to end blindness. He also worked in the White House for President Lyndon Johnson.

Through it all, Sanford still remembers praying with his roommate, Art Garfunkel, in the college dorm room, 60 years earlier.

“Anyone hearing his voice singing the prayers, is in awe. Throughout life I have been blessed with music, music that came from the sweetest singer in the universe. What a beautiful friendship. To see more about this story of friendship, watch this video from the Today Show.

GrantWatch Looks Out For Those With Challenges

Here is an awesome grant for up to $25,000 that helps nonprofits become visually challenged friendly. If you have any questions regarding these grant categories, or any other, feel free to reach out! You can reach our amazing customer support team for any of your grant questions