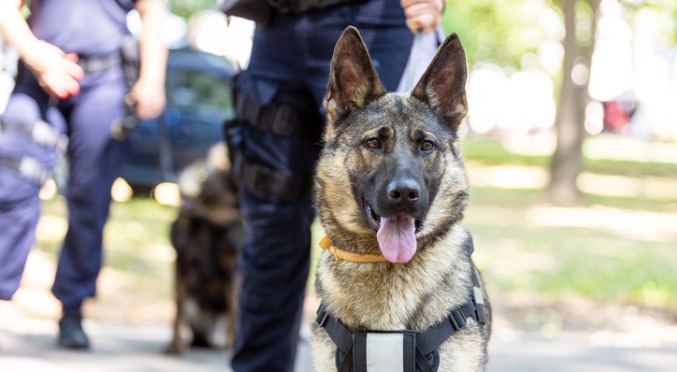 Wearing a protective covering over his arm, JuJu Smith-Schuster wasn’t dodging defenders like he normally does on Sunday afternoons during the National Football League regular season. The wide receiver for the Pittsburgh Steelers was, instead, warding off a police dog at a Sunday afternoon charity softball game in Findlay, Ohio.

The stunt, watched by an estimated 2,000 fans, was part of an event that raised money for Findlay High School athletics and the Ben Roethlisberger Foundation. Roethlisberger is the Super Bowl-winning quarterback of the Pittsburg Steelers. His foundation is known for its work with K-9 service dog units.

Roethlisberger, who attended Miami of Ohio University before embarking on an All-Pro career with the Steelers, said he enjoys giving back to the community. Over the years, the Roethlisberger Foundation has awarded some $2 million in grants to police and fire departments across the United States.

Despite the rivalry between the Cleveland Browns and the Pittsburgh Steelers, Roethlisberger decided to give back through grants to both the Lorain Police Department and the Medina County Sheriff’s Office. Lorain police will use the grant funds to update K-9 training equipment and install a shelter to hold stray dogs found in the community until an owner can be reached.

Libby Hikind, founder and CEO of Grantwatch.com, said foundations that support safety initiatives are the secret weapons of law enforcement. Thousands of dollars in grants from foundations and government agencies are posted on GrantWatch. These funding sources enable communities to hire new police offers, test new strategies and obtain technology to improve their response to crimes as well as improve public safety through the investigation of illegal drug activities.

Fort Mitchell Chief of Police Col. Andrew J. Schierberg said his grant helps a smaller department, like his in Kentucky, support K-9 units, while in Avon, Ind., the Roethlisberger Foundation will fund the purchase of another police dog to strengthen the interdiction of illegal drugs, such as heroin and dangerous opioids. Foundation grants have also funded new ballistic vests to keep K-9 partners safe when they protect and serve.

Sharpsburg Mayor Matt Rudzki swore in the newest member of the borough police department last month. K-9 Officer Jango is already busy working with Officer Jeff Hussar, who said he has fulfilled a lifelong dream of becoming the department’s K-9 officer’s handler. A grant from the Ben Roethlisberger Foundation helped bring in Jango, the vehicle that transports him and his training at Shallow Creek Kennels.

Local law enforcement agencies, nonprofits, small businesses, entrepreneurs and concerned citizens frustrated by the often-overwhelming process involved with acquiring support to reduce crime can identify funding opportunities that are easy to read and simple to comprehend at GrantWatch.com. Sign-up to receive the weekly GrantWatch newsletter which features geographic-specific funding opportunities.